Grant Baciocco was born on May 20, 1974. From a young age, one of his constant companions was a little red tape recorder that his parents gave him (and which he still has). He used the tape recorder to make up stories, shows and record his parents when they were yelling at him to play back later when company was over.

Grant is the creator of the popular podcast The Radio Adventures of Dr. Floyd. He’s toured the U.S., played the Tokyo Dome in Japan and opened for “Weird Al” Yankovic with his comedy music act Throwing Toasters. He is the Host and Producer of the official podcast for The Jim Henson Company as well as an Associate Producer for Cinematic Titanic from the original creators of Mystery Science Theatre 3000.

His award winning work has been featured on iTunes, TiVo, in SPIN magazine. His work has been considered for Grammy Awards and the book, Podcasting For Dummies named Grant one of the Top Ten Most Influential People In Podcasting. He has a track record for delivering fun, high quality projects that engage audiences around the globe. 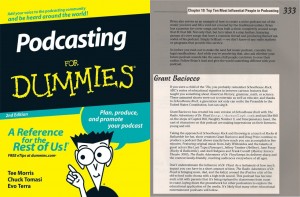 This is his blog.